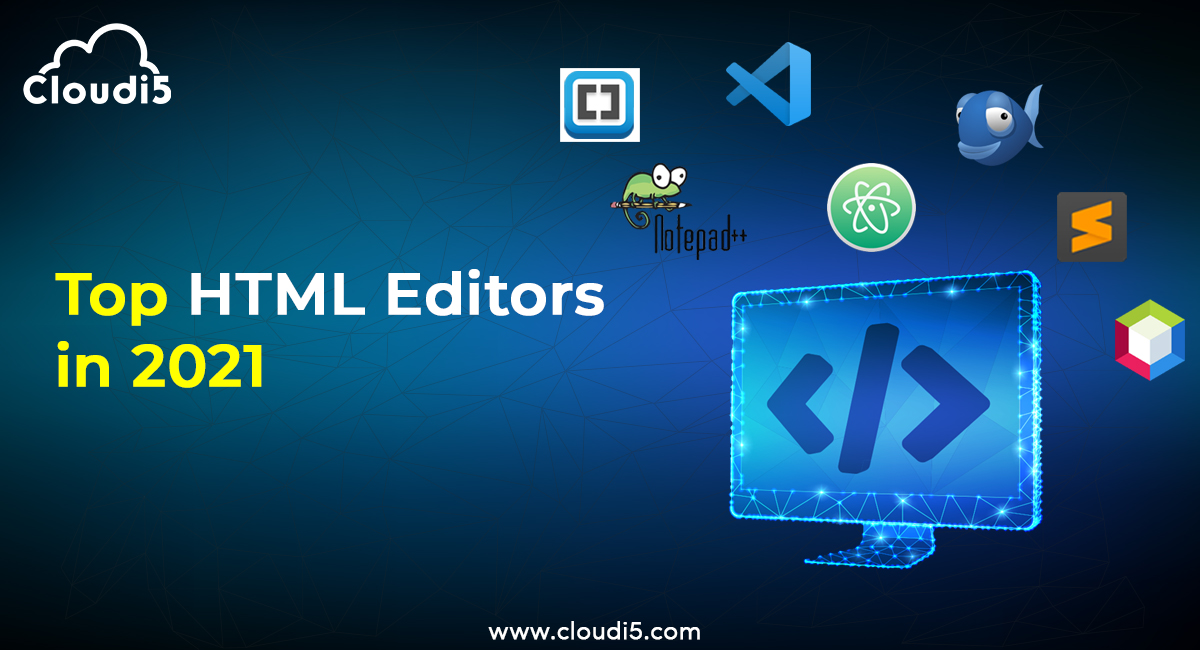 HTML editors are text-oriented software programs used to create, modify and edit HTML codes that are used in websites. Akin to text editors like Notepad, HTML editors allow users to enter raw text. Though one can code using text editors, the HTML editors have greater functionalities than the normal text editor that enables the quick creation of web pages.  They ease the process of an otherwise exhausting, website development.

They come in free and paid versions, with a distinction in offering features and functionalities. Through HTML editors web designers shall exercise complete control over the codes and thus can create websites with minimal effort; And with the autocomplete and syntax correction, HTML editors have the ability to correct the minor error that occurs as the developer builds his code. Because it allows users to dive deep into the source code, HTML editors help the web designers in identifying the hidden details.

Listed below are some of the top HTML editors along with their pro’s and con’s to help businesses in hiring a web designer or agency.

Developed and released by GitHub it has around 8700 additional packages that can be installed apart from the 81 in-built packages. Offering wide theme collections and packages, it has evolved to become one of the best HTML editors. It is quite easy to use irrespective of whether you are a beginner or a learned professional. Web designers can write their code side by side due to its multiple pane support that enables accessing multiple sections in a single interface. It’s available free of cost. Other notable features include auto-completion facilities, syntax correction, and project management.

The open-code editor that provides multi-language assistance and support, Notepad++ was initially built to support computers that run on Windows. Because it exists as an open-source code editor the users are free to add attributes, functionalities, and plug-ins as per their needs from various online communities and forums. It is known for its feature-rich interface and is highly customizable as per the requirements and preferences of the user. Auto-completion, syntax folding, and highlighting, bookmarks, mobile optimality, etc. are some of the notable features.

The updated version of Notepad++, Sublime Text was launched as a cross-platform editor with Python API. It is a freemium software that to access additional features you need to pay more, though its free version has sufficient features to support beginners. Apart from the features of Notepad ++, it also has additional features to meet the demands of more experienced professional web designers. As some of the packages are available on open source, the editor has powerful features and promising performance capabilities.

Developed by Adobe, Brackets is an open-source editor with promising auto-completion features for the front-end developers and web design beginners.  It’s known for being compatible with different operating systems and has an in-built package manager that enables users to install packages that aspire and require. The find and replace option allows users to calibrate the code as per appropriate requirements.

All the above-mentioned editors from ATOM to Brackets are more optimal for front end development while Adobe Dreamweaver CC is apt for back end development. It is a closed source software and works the best on Adobe ecosystems. Offering a wide range of plugins with premium features and functionalities simplifies the process of editing the codes and creating responsive sites. It has the ability to design and build web pages that align with screens of any dimensions and scale.

The easy-to-use editor enables web designers to design simple sites and is more apt for creating static sites. It has ample options to write programming code and script, while also supporting several programming languages. It runs on most platforms and operating systems, and the fact that it’s quite easy to personalize the tool with external commands, keeps it updated to the latest trends. Auto-recovery, multiple interface support, search tools, in-line checking, and spotting, are some of the significant features of Bluefish.

Visual Studio Code launched by Microsoft is a free, open-source, multi-platform HTML editor. The significant feature is its debugger, which offers the ability to debug commands on the console. The VS code supports multiple programming languages. Though the paid version has more advanced features, the attributes and tools available in the free version are good enough to sufficiently meet the requirements of the HTML editor. The IntelliSense from VS code helps the user in navigation and understanding the code.

The Apache NetBeans is free software that offers an open-source IDE (integrated development environment) for software designers and developers. It integrates the source code with Git, CVS, Mercurial, and so on. It is known for the fact that it reliably auto-completes some parts of the codes apart from syntax highlighting and code folding. In the task window that it offers, one can search tasks, save them, revise them and resolve the tasks in the repository. Owing to the fact it is open-source software and the vast strength of its community and plugin marketplace, it is easy to search for plugins and find solutions that the users endure.

Are you looking to create a website with unique features, attributes, and functionalities? At Cloudi5 Technologies, a top-notch web design company, we help clients build a unique design either from scratch or an updated design to revamp the existing site. The easy and best way to design a website is to talk to our experts.